Title is a Frank Turner song, of course

Thursday morning, during my bathroom routine out of the blue I thought

“I wish I hadn’t given up on trying to teach myself how to play the guitar all those years ago”.

Those thoughts stuck and during a lull in the office that morning I quickly went on Amazon and browsed various sites and continued with that at home that night. I even took the guitar from my Mum’s spare room, where I had stored it (about 24 years ago according to one receipt) even though I was pretty sure it wouldn’t be salvagable after all this time. Spoiler Alert: it wasn’t.

The difference to my aborted attempt back than of course is, that now we have this wonderful thing called “The Internet”. Some folks reading this here might remember the times without it? 24 years ago I only came up with the idea to buy a guitar, because I sometimes passed a music store on my way to uni and thought maybe it would be fun to teach myself how to play it. Back then I had to resort to a guide book and chord diagrams. There might have been lessons on CD or audiotape but I never used any. There definitely weren’t any online tutorials. We hadn’t really had any idea of “online” then. Hard to image now, isn’t it? Anyway, in 1996 I aborted my attempts to teach myself after a while, possible because I found it too hard and didn’t see any progress and maybe not even any use for it. I wasn’t “into music” then the way I am now.

Back to the present day: Less than 36 hours after that bathroom moment, I had not just ordered various bits and pieces from Amazon (e.g. a neat Snark tuner) but also had gone to a big music store in our area which has left-hander guitars on stock, tried a few and bought one. HOLY SHIT! This is happening. For real. 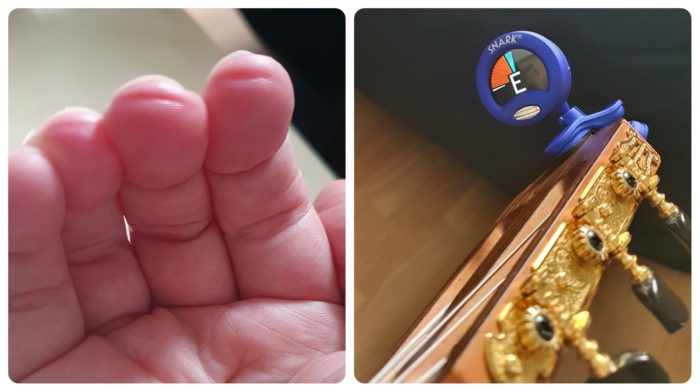 I also found a good online tutorial program (and a few backup ideas) thanks to the reccomendations I got from two band related Facebook groups I’m in. Getting reccomendations from people “on the internet”, unheard of in 1996. Yes, I’m going on and on about this, because I can’t believe I let that one experience of “trying and failing for whatever reason” keep me from trying to pick up a guitar again and try again. And I think it might have been different, if my first try had happened with the internet around. Ressources and easy access to other people and all that.

I don’t know what brought that idea of “just try again” on this week. For years, ever since I started seeing Frank Turner do song tutorials I thought

“Man, I wish I could do that or even get what he’s talking about.”

“I don’t understand a word of what he’s saying, but I like listening to him talk anyway.”

While at the same time a part of me deep down always wished I would in fact understand what he’s talking about. Do a bit of what he does. Learn a new skill. Play along to some of my favourite songs. Just do something! But then the negative nagging voice in my head often replied with a lot of reasons why it’s a stupid idea to even think about trying again. Too old, not musical enough, failed the first time, so I better accept I won’t be any good and and and. But for some reason this week I obviously decided to ignore that voice for a change. Go me! And what better time to spend hours learning a new skill than now, right? While we will all be sitting home (alone) a lot. At least learning that new skill is the plan. I’m not always the most consequential person with my plans though… But at least I give it a try again. For now.

This afternoon I took the guitar and my laptop to my Mum’s, because I thought me fiddling around (it’s not much more yet) sounded rather loud and I was afraid my neighbours in any of the other 5 flats in my building would get annoyed quickly. Not sure they even heard it, because when I set up in one of the spare rooms at my Mum, she and Bro3, who’s living in the building as well, said, they didn’t hear anything. I don’t know. I might continue doing longer practice sessions over there, just to be sure.

So far I’ve learned about the D and the A chord. As in: know where the fingers go, managed to play them a few times. Not with consistency and definitely not with proper chord changes. No way. Seeing Frank (and to be fair every other guitar player) go from chord to chord and back so automatically seems even more impressive now than it already did before. But… he’s been doing it for 25 years. I’ve put my fingers on some strings for less than 2.5 hours so far. Step by step, right?

For now I’m just happy that I’ve taken the plunge to try again and that I’ve got a new worthwhile project to keep me busy till the worst of …. THIS … is over. There is a limit to the amount of LEGO to build and Netflix to watch and books to read.

Pandemic Bulletin: When I left work, my colleague told me about a mail, just in, from the people in charge: masks mandatory everywhere at work from now on, except at own desk (in a single occupancy office?).

Mood: Crappy. Again only half productive at work, the state of the World (aka Pandemic) worries me too much to really focus. Thinking about the lovely Frank Turner gig on this day two years ago didn’t help the gloomy mood either.

Positivity2020: I had a nice walk at the zoo after work. Hung out with my mum and Bro3 for a bit this evening. Tomorrow is a new day.

Here’s a photo from this afternoon

That’s sort of a cop-out for a blog title. Frank Turner lyric, yada yada… I couldn’t think of any other non- lyrical summary for this day. I was in a weird mood since I got up. I originally had planned to either work out or organize my week a bit more in the early morning. I did neither. Maybe I was still a bit gloomy from last night….

Out of the blue I was just hit full force with vivid memories of being on a nightbus back to Aldgate. I mean… WTF?! Because of course that was followed by a flood of amazing memories from that lovely weekend in January 2020. A lifetime ago 😭 pic.twitter.com/ibj6G9zDcd

This afternoon Instagram Archive brought up photos from the first few Frank Turner in Europe tour I went to two years ago. Yep, that DID not help with my mood either. Especially when I remembered this online interaction…. 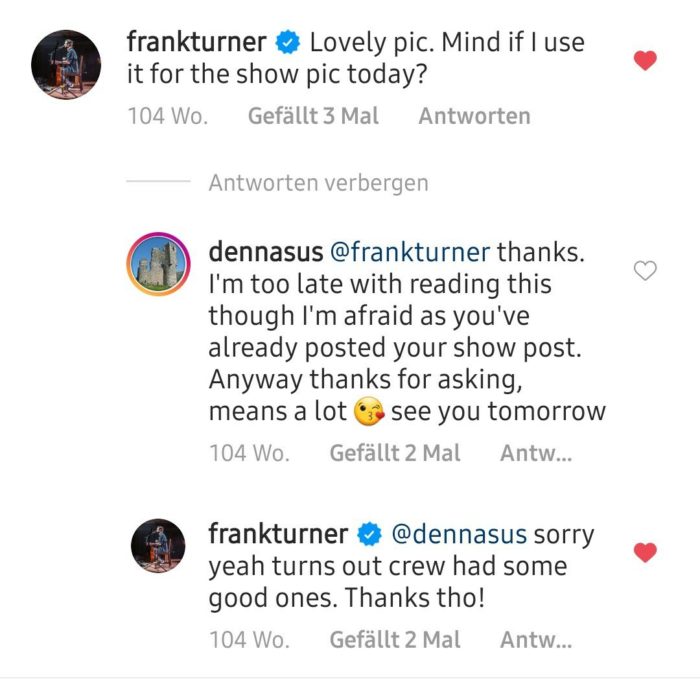 Livemusic and gigs and travelling to gigs and hanging out at the bus parked in front of the venue after the show and hugs and chats will happen again at some point, right? RIGHT?!?!?

My time at the office was semi- to low productive today. No surprise, really. I did some admin stuff, caught up on a few things. Still waiting to hear back from others so I can go on working on other more urgent things. Felt equally under- and overwhelmed. I blame that fucking pandemic.

In my spare time I called the car dealership to tell them I’d like to buy the car I tested last week. Holy shit, this is happening. Still need to make yet another list of what I have to get done / do to make that happen. I also need to sell my old car. Yikes. Adulting hard here.

In the spirit of adulting I also still need to think long and hard if I should really send a mail I might want to send. Or if I shouldn’t, because it would only make me feel better, but bother or not even interest the other person. It’s not all about ME, I need to learn that. I still might send it anyway. #cryptic

A) I checked social media before the COVID dashboard about the latest numbers. Go Me.

B) While I was looking for a scarf this morning I came across the light gloves I had bought in early March. When I was already a bit worried about touching surfaces, but still determined to travel to the UK for a gig! Absolutely crazy and irresponsible. I didn’t go in the end obviously.

C) We’re cancelling meetings and smaller gatherings at work due to rising numbers. Which is the right thing to do. I don’t feel comfortable being in a meeting with other people for more than a few minutes at the moment either. My department head was kind of sweet this morning, when he wanted to check in if I would accompany him to a larger meeting (if that happens at all) or rather not, riskgroup and all. And he was wondering why I was at the office at all, as I am allowed to work from home. But we have an empty office at the moment and right now I still prefer to come in. Let’s see how it will feel next week.

Mmmmh, maybe I shouldn’t keep the Positivity Stuff till the end, but start with it and end with the depressing Pandemic Bulletin? Next time, maybe….

A beautiful sunrise this morning.

Getting an unexpected update on a … ‘project’ (?). I’ll let you all know more, when it’s time to talk about it. But I’m excited.

Another book delivery. I read the first few pages and already know I will enjoy it immensly. Cute dogs and Scottish mountains. What’s not to enjoy? 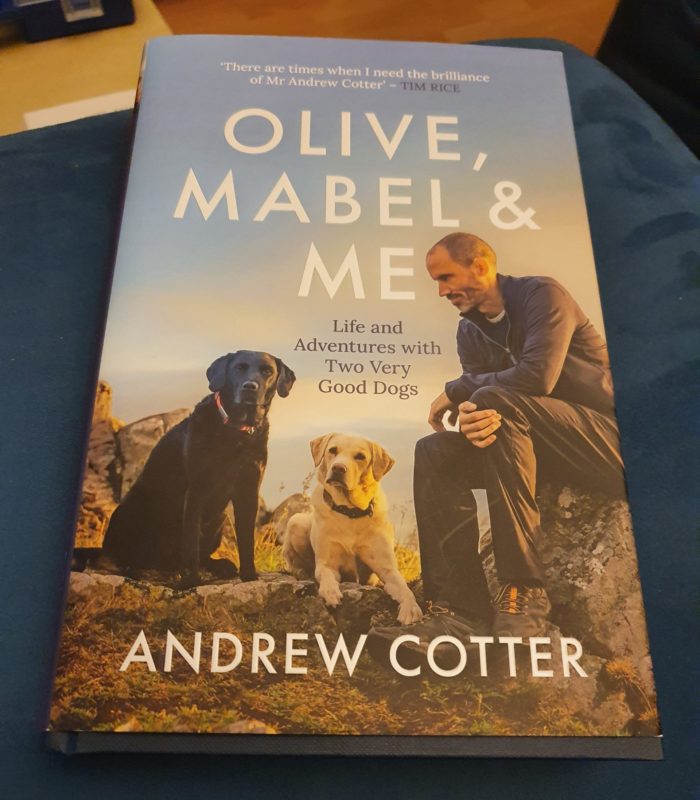