Two months in and I still can think of Frank Turner lyrics for post titles. Running a bit out of ideas though.

I’m tired. Again. Still. Whatever. And it’s only Monday. I guess this will be another week where I get up an hour early to get some things done.

This morning I was in an IT training. 10 people in a training room. Open windows, tables spaced apart and therefore no mask required. I decided to use this occasion to try out my Urbandoo [German website]. 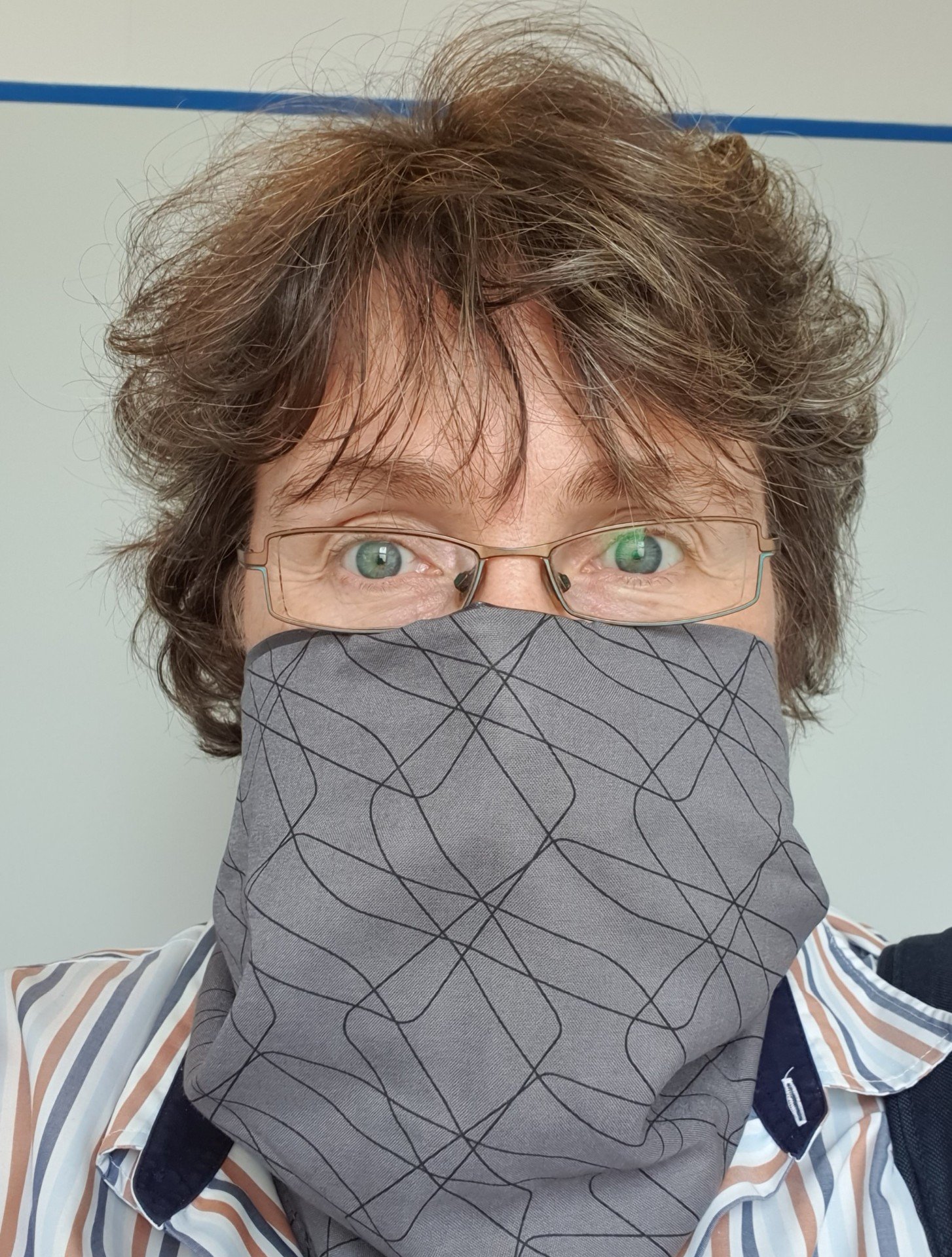 Once I had gotten the hang of how to tighten the cord, it was fine. But… outdoors at 25 °C it felt a bit sweaty underneath quickly. So let’s see how long to use it until I get the need to wash it, because it feels too icky. Besides that I love that the loop / scarf element of it makes it feel less claustrophobic than a regular mask.

Work wasn’t as productive as I had hoped the rest of the day. But we had a lovely chat at the office, which are things I’m going to cherish, because I’m afraid sooner than later we’ll all be back at working from home, because the infection rate will rise, because people are stupid.

In the early days of ‘lockdown’ (which wasn’t really a lockdown, I know), I wrote a few “It Comes in Waves” posts on my previous blog. This here could qualify as another one, but right now I’m still trying to go with lyrics for the titles. Anyway, yes, the waves of emotional ups and downs of a global pandemic. I was doing okay for a while now, so I don’t know what caused the slip down into a well of worries and anxiety and lethargy and stuff. I might be able to blame it partially on the scorching heat wave over here, but… I don’t know.

Thursday 14th was the date, exactly a year from when I last chatted with Frank Turner face to face after a gig. I don’t know why that memory and knowing that it might be another year till I get that chance again hit me as hard as it did. I was sort of okay with the uncertainty of not knowing when they will be on tour again. But the idea of it maybe being another full year is depressing, whether I catch Frank and the band after the gig or not. Frank Turner gigs are my happy place, where I got to recharge emotionally and where I (re)connect socially with like minded people. I miss that. I’ve never been the most social of persons and I’m afraid in these months of staying home and staying in I’ve lost some of my drive to even be social. There are a few friends I haven’t checked in with in a while and we could easily meet up outdoors for a bit, but at the moment I can’t seem to bother sending them a mail and ask about it? What the fuck is wrong with me? I don’t want to live a solitary life, not really, but the idea of going out to meet up with more people also feels like a chore at the moment. And it shouldn’t, because I know I will enjoy it and have a good time and will be happy to see my friends. I don’t know what’s wrong with me. No idea how this got from ‘missing gigs’ to ‘being a hermit’, but here we are.

There are two more things that are stressing me out at the moment: work and local politics. Work is just very busy and there are important projects I need to stay on top on and more often than not I feel I’m dropping the balls. Or am afraid I’m dropping them which in my mind basically feels as bad. I still haven’t quite figure out a better / organized way to deal with that. It feels similar with the local election stuff on my political side of life. There is still so much to do and only a handful of people willing to do anything and at some point I had to put the foot down and say “I can’t / won’t deal with this issue” and just trust that someone else will pick up the slack But I felt bad about it and I might not have been the most diplomatic about it. Or maybe I was and I’m just worried too much over nothing, because I’m a worrier. Either way there is still so much to do and that unfortunately often puts me in a “hide and procrastinate (aka read novels instead)” mindset, which is so not helping! At all!

Yesterday I felt especially down after a half a day out campaigning and the heat and all the things on my mind. I tried to nap in the afternoon, but my mind didn’t shut up. In the evening I was feeling particularly grumpy and low and almost didn’t tune in for the Biffy Clyro live stream I had just bought a ticket for that afternoon. And then I was so glad that I did. The live stream from the Barrowlands in Glasgow was incredible, high quality, amazing production with lots of changed sets and backgrounds and such. It must have cost a fortune! The one thing that blew me away though was something from the pre-recorded “pre-livestream” part. An immersive audio experience of a few songs, where Simon walks around the mic and of course it sounded like he walked all around me, and then Ben and Jamie joined in in harmonies. The bit that blew my mind though was that they picked “Machines” for the first of two songs for this and the lyrics all of a sudden meant so much to me, I almost cried a little. I love when a song suddenly touches me in such a profound way.

Crazy as it sounds, you won’t feel as low as you feel right now…

There is hope after all, guys. One step and one day at a time.

Taking the pieces and build them skywards

And I’m quite happy that it was a song that turned my mood around. Music is the best after all.

I can’t stand this weather any longer. It’s so so tiring to spend almost 2 hours each day in a car to drive to work when it’s over 30°C.. Spend 8 plus hours at the office. Not doing much more than be lazy on the sofa after, because you can’t be bothered to do… anything. I will need to get up extra early tomorrow once more to get some stuff done before work.

The week at the office didn’t go as planned either. At all. Partly I blame the heat, which is making many of us loose focus. Mostly it’s urgent tasks being dropped on my desks every day and I can’t get to do the many things I know I need to be doing. I had sort of plan on Monday morning, damn it.

Off to bed now…