Sleep | Late afternoon on Friday I lay down for a nap, because I felt so exhausted. The flu jab I got on Thursday might have contributed to that. And the lot of stuff at work. I woke up about when the my alarm went off two hours later. Luckily I had set the alarm or I would have slept through Felix Friday. But I obviously needed the rest. I got another solid 8+ hours in last night and I’m trying to not go to bed too late today either. I know I need 6-7 hours to be well rested. Why can’t I just be sensible and get those on a week night? Adulting is hard, yo.

Coffee, Cake et al | I tried to cut back on my coffee intake over the weekend as well. No idea if it will help with the sleeping, because I fall asleep quickly and sleep through without any bigger interuptions. It can’t hurt though. About the cake…. I was at a 50th birthday celebration today.

Outdoors, only close-ish family, which still came to 14 adults, two children, a baby and a dog 🙂 It was good to see parts of the extended family I haven’t seen in a long time, even before COVID. A bit weird to not hug anyone or to not snuggle with any children, but it is what it is. The good thing was, that we were able to meet up in the first place, because the weather around here still permits gathering outside on the patio to have a barbecue and eat cake and all that.

Getting older | I caught myself turning into one of those people, I always rolled my eyes at when I was a child / teen. The ones who like to remind younger people, how small (and cute) they once were. Because when you’ve known someone since he was about 10 and in the past 20 years he’s grown from a slightly chubby pre-teen into a tall, good looking almost 30 year old man, it’s weird to not mention how he once was “little M”. I’m 45 years old and felt like a grandma in that moment. Fitting to that was that quite a few people I hadn’t seen in a while mentioned the (few) grey hairs on my head. 45 years old. Grandma. Yep! I’m kidding, I don’t really mind the grey and it’s really only in a few bits.

Being sentimental | Quite a few times in the past few day I was getting sentimental, bordering on heartbroken about the previously wonderful experiences we’re missing out on at the moment. Most of it is Frank Turner / live music related in my case. I have a picture of my friends and me and Frank next to livingroom door and for the first time in ages yesterday it put me in a bad and sad mood to pass by it. Because I have no idea when I will see my friends in the UK or Frank again. And I miss those moments. Another wave of heartbreaking longing hit me while I was watching “Enola Holmes” on Netflix yesterday. Even though it was set in historic London and the English countryside and I don’t know where it was actually filmed, I realized just how much I miss London. And the UK countryside. And again… no idea when I will be able to be back there again.

LEGO | In my desperate need of distraction from Frank Turner / London memories I decided to start with the remaining LEGO set, which I had but in the height of ‘lockdown’. The White House. (Picture from earlier today, by now it was a roof and trees in the garden and all) 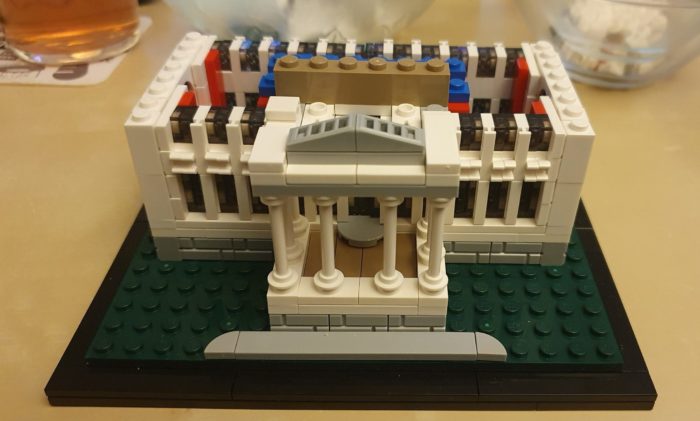 Following instructions to put tiny pieces together definitely helps to keep my mind of things. As I expect the winter to be long and solitary again with not much meeting of other people besides at work, because… global pandemic and flu season, I might need to stock up on some more LEGO to keep me busy. My go-to LEGO online store has the Tower Bridge in stock again. Expensive but probably worth it. The problem though… the coffee table in my livingroom on which I usually do my LEGO sets is too small. I might need to move into the kitchen with it all. Need to ponder that for a while.

Sleep | Two nights in a row with over 6 hours each. Almost rejuvenated. Busy and slightly frustrating day yesterday, busy but okayish day today. I’m still pretty knackerd and the flu shot I got this evening adds to the “lets just lie down and sleep” mood.

Notes | Yesterday I jotted down some notes here to maybe turn into a post. That obviously didn’t happen. Right now I can’t really makes sense of what I wanted to write about, when I left these notes. And can’t quite be bothered trying to remember it. Scatterbrain that I am.

Work I | Yesterday I felt a bit chasitised at work. Rightfully though as my supervisor reminded me that I need to be more proactive in my projects and be more in charge and all that. I know, I know. He was nice about it, even though I felt bad and guilty for a moment. I still do to some extent, because he’s right and I know I have to make more of an effort in that regard. But I’m usually not a “take charge” person at least it’s not in my nature. *sigh* A good thing though was that this moment didn’t leave me as frazzled and spiraling into self-doubt and self-loathing as it would have a few years ago. Although there is a annoying voice in my head whispering that maybe I should be more worried and flaggelating about it. *sigh again*

Work II | Today I spent about 3 hours in two sperate Zoom meeting in our international project and I’m always leaving those in a good mood. Motivated and inspired and just happy that I’m allowed to chat to other people in English about climate action and arts and culture and see super interesting projects from all over. I’m going to miss this when the project ends next summer. Some stuff reminded me that one of my favourite musicians – Felix Hagan – is writing the music to a climate crisis musical at the moment and I’m getting all giddy just thinking about it. Weird, but very welcome overlap from my professional life and my fangirl life.

News! I’m absolutely thrilled to be cranking out megariffs for this marvellous show, taking Poppy’s glorious words and dipping them in my big loud glittery sonic madness. Watch this space for songs! https://t.co/NTt1Y3mVRo

Sleep | Ugh! Again less than six hours. Not enough. I will got right to bed after I publish this short post. I swear. Yell at me if you see me on social media later.

Coffee & Chocolate | About 3.5 cupsev. Cookies at work, because I was tired. Yes, that’s a logical thing. A few tiny chocolate muffins at home, because the package was open and they’d go stale otherwise. Still… logical.

Work | Not as efficient and productive as I had liked (see Sleep). Intra-department project meeting, which went okay-ish. Well, it went good, I guess. Why do I always tend to see it less than that? Quite a few chats at the office were speculation if we’ll be back at working from home any time soon, as the COVID cases in the city I work in have risen recently. I doubt it will have any effect on us at the office yet though. The infection mostly happened at large gatherings, parties and such. Not at the regular work place. But you never know…

Waves | On the previous blog I had sort of a series (four posts) about how I was reacting to the vast changes the pandemic caused in my life. I sort of got used to this “new normal” most of the time, but at least once a day I have a “WTF? This is all so surreal? What are we doing?” moment. This week I was for some reason reminded that it’s been half a year since the shit hit the fan so completely hiere in Germany. It feels equally a long time ago and no time at all. Something else that’s been dragging me down a bit more lately are the random memories of vacations. Often memories of vacation in Scotland. Recently a weird prompt made me think of Scotland. Whenever I wait in a narrow spot in a road to let a oncoming car pass (or the other driver waits and lets me pass) and we acknowledge this to each other with a raised hand while passing each other, I’m reminded of doing this constantly while driving the narrow roads in the Highlands. Pulling into a passing place or passing another car which pulled into such a place. On these roads you constantly raise your hand from the wheel to signal ‘Thanks’ to the other drivers. And I have no idea when will be the next time I’ll be driving these roads again, because… Global Pandemic! And I haven’t even started talking about the shitfest that will be a hard-no-deal-Brexit in 2021. I miss Scotland. 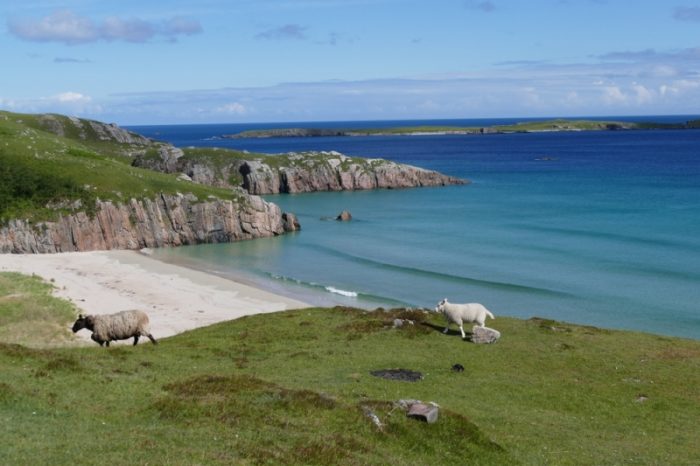 Felix Hagan & the Family | There was a time recently where I wasn’t in the mood to listen to his music, but now I’m back at enjoying it. A lot actually. Why did it take me so long to realize that “Whether we ever endeavour to weather the storm” is a great lyric. Rhythmically and sonically or whatever you call it. It just pops. To me anyway. Check him out. On Bandcamp. Or live on his Facebook every Friday evening. This week it will be covers of One Hit Wonders, which will be interesting, I think.