How can it be late November already? Where did this year go? Well… there is a global pandemic! That explains it to some degree, I guess. But seriously… It’s t last week of November. WTF?!?

I haven’t posted in a while, which sucks. For a variety of reasons. One, because I felt stressed out by work and other stuff. Good stuff in some regards, but still new and exciting and hence… stressful. Busy with work in more than one way. Like really have a lot to do. But also worrying too much about what to do and how and so many other things. I hate my brain sometimes. There is so much I just don’t have the words for at the moment. So many thoughts. So little words. Which sounds weird, because thoughts are words as well, aren’t they? So maybe it’s less thoughts and more emotions which keep my mind occupied and wordless at the moment.

I’d like to blame all THAT on the pandemic as well, but that’s not quite fair, as it’s always been a part of my messed up mind. The pandemic doesn’t help though, so there… shifting some blame at least. I’m watching “The Crown” at the moment and as much as I enjoy it (secretly royal family gossip whore that I am) and the Royal Family spends an awful lot of time in Scotland this season and it breaks my heart. Because I love this landscape, the hills and mountains and the beaches and to see these on screen without knowing when I’ll be back rambling these places, makes me incredibly sad *sigh*.

Let’s talk about the good news, that have been stressing me out this week: I finally got my new car. And I love it! Yes, even as a Green who knows we need radically change our idea of mobility to a more climate friendly solution. I’m doing my part by now driving a CNG based car, I wrote about that here once already. And even though it’s a small (medium sized) car for modern standards, it is such a step up from the one I drove before: a Renault Twingo, which had more than just the basics, but it was built in 2011, I bought in 2012 and there are so many more gadgets in a car now. And I’m a bit of a nerd about gadgets, so I love it. I spent quite some time the last two days checking out everything and driving around quite a bit. But I wanted to try it out in the dark once before I drive in the dark to work tomorrow. And to also check out the media system, which is brilliant. Well, compared to the previous car anyway. I’m extremly happy with it. Yes, shallow to base happiness on a inanimate object, but I don’t care.

Oh and yes, of course I had to state my allegiance first thing, because what kind of fangirl would I be, if I hadn’t? 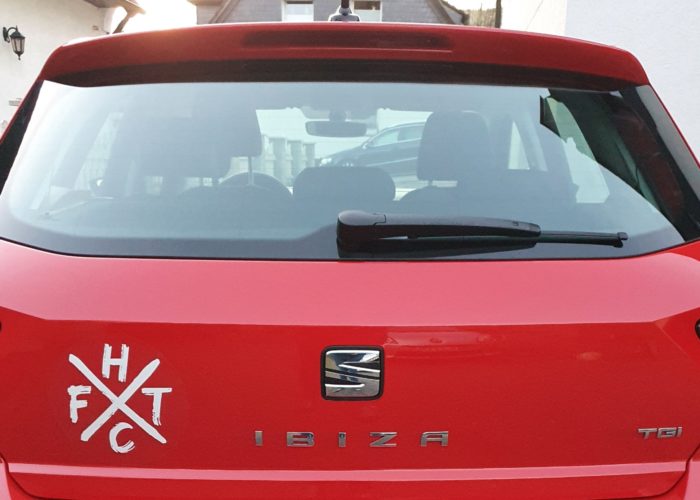