All week I couldn’t be bothered to write anything down here, when I got home from work. I thought, just keep it for the weekend because I was certain I’ll write a blog post on the 10th, because it’s such a nice date 10-10-2020 and I’m a bit of a nerd about even numbers / dates like that. And now the day is almost over already.

I’ve been quite busy at work this week. Again. On the one hand I feel like moaning about it, because I feel overwhelmed, mentally more than physically, but either way it’st taking a toll. On the othe hand I feel bad about moaning, because I’m well aware how privileged I am with my job. It’s well paid and seure. I actually feel like I’m doing something worthwhile and not just shuffling paper. I like my coworkers. It’s all good. Just a bit much at the moment. The weird thing is, that part of the overwhelming feeling is self-inflicted, if that makes sense. But that doesn’t make dealing with it any easier. Anyway… my mind’s not up for much else than going to work, checking on my mum, vegging out on my couch. Going to bed. Repeat.

Oh, and the global pandemic isn’t helping the existential dread of feeling overwhelmed constantly. For the past few weeks I had actually been doing ok, I thought. I got used to new routines and the way things were. But now numbers are rising all over again and I need to reconsider how I move around and what I do more than before. I still am part of the risk group and even though I still stay out of gatherings and crowded places, I start worrying that I might have become to complacent. A few days ago I met some freelancers I work with on a project at a cafe / bar. We sat spaced apart and and so were the tables. 1.5 metres? Not quite, but still. I didn’t really worry about a thing while I was there. After though I wondered, if it had been a stupid thing to do. I still don’t know… I do know that I’m still and even more and more angry at all those people who don’t care or who think COVID isn’t something to worry about and those who are reckless with their own lives and all of ours. *sigh*

I might have mentioned that I’ve started listening to podcasts on my drive to work, because music often felt too distracting. This week it’s been the “Alles gesagt” podcast with Alice Hasters from earlier this year. She’s a Black German journalist, who wrote a bestseller about racism in Germany. Very inspiring and she definitely gave me lot of food for thought about my own privilege. I really enjoy the inspiring and thought provoking aspect of these “Alles gesagt” podcasts.

Ok, that’s one of the notes I jotted down to blog about, done 🙂 There was more of course, but most of it doesn’t feel like worth talking about days after I thought of it. I really need to blog more often during the week. I’m afraid I might not get to do much of that next week either though, because…

I bought some more LEGO 🙂 Those are older sets which don’t come with numbered bags, which seemed daunting at first. I went the DIY store to buy a few  small part organizers to put the bags contents into. It’s still a bit of a hassle to search for small parts in all the compartments, but it’s not too bad. Yet. The camper van is such a detailed endeavour. The first bit I built this evening seems like something that’s kept under the hood, so might not even be visible, but it’s still so detailed. Amazing. This will keep me busy for a while the next few weeks, I guess. 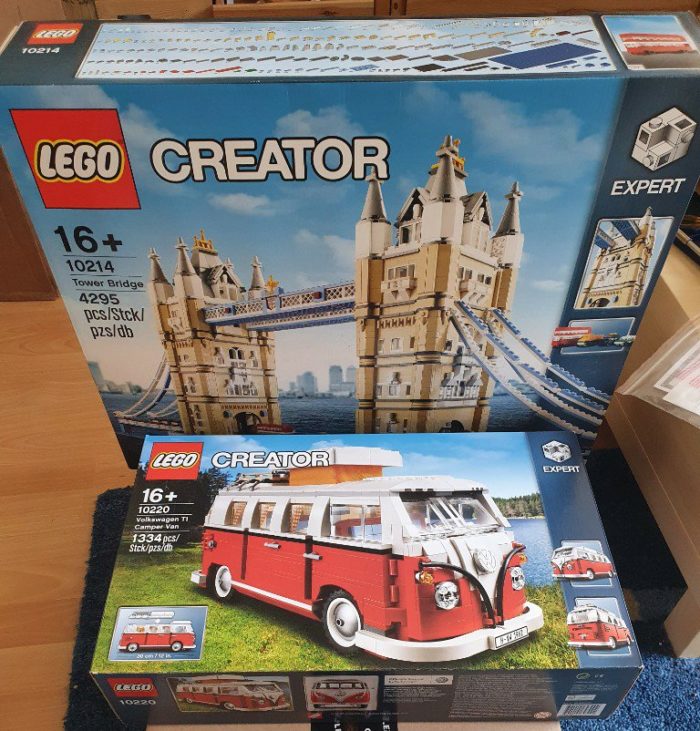