Novelty | I finally found a new theme I like well enough to actually pay for the PRO version, if only to remove the opacity from the header picture. I will tweak other bits as well, but not right now as I need to look into all the options first. And I really want to write this post first. I started writing a post yesterday and the day before and never followed through.

In Circles | Almost 11 years ago on the old blog (whatever form or title it had back then) I wrote a post titled “Life’s Like A Jump Rope”. It was basically a long post about the ups and downs of everyday life. I picked that lyric as a title, because I was deep in a Blue October phase back then. Like DEEP! I’m too lazy to go back and quote some of what I wrote back then. With all the “Frank Turner lyrics speak to me” fangirling I’ve have been doing over the last seven years, I somehow totally blanked out that years before Frank, there had been this other band – Blue October – who had some lyrics I felt similar about. For the first time ever actually! It blew my mind back then. It still does now in a way. I’ve changed and moved on and moved past those troubled lyrics from back then. More or less anyway.

I hadn’t thought about this band for years until … Frank Turner and Jaret Reddick mentioned them in this week’s edition of “Back To The Metal” their weekly Instagram chat. Just briefly and in passing, but Frank stated, that their had been plans to do a few shows together with “Blue October”. And for obvious reasons I freaked out a tiny bit, in a good way. The two only acts who ever made / still make me feel understood and “seen” in all my emotional mess on a lineup together? Wow! I know even if there weren’t a pandemic which cancels all touring plans, this probably would have happened far away from me in Texas, USA, but still… Wow!

Yesterday I finally bought all the Blue October albums I missed since I somehow forgot about them and I like a lot of the newer material too. Definitely on my “to watch” list for… whenever real gigs will be happen again.

Overdue | I’ve been a member of our city council and a few council committes for many many years now. Council and committee meetings come with a lot of paperwork. Reports, proposals, bills, the budget and everything else that needs to be discussed and decided on. A few years ago there was an option to go digital, but I didn’t back then for a variety or reasons. I will definitely go digital after the next elections in September. Anyway, about two years ago I started letting slide sorting all this paper into the various folders in my shelf. Because those folders and trays in my shelf were full already. And once you stop sorting and postpone it… it get’s harder and harder. I knew most of the stacks of paper could be thrown out after all this time (as we get everything in digital form after the year’s over anyway). It still needed to be looked at before shucked out and there were so many stacks on my livingroom floor and kitchen table by now. It crossed the border to messy-land some time ago. So this afternoon I finally sat down and looked at everything and shucked. That’s the remainder of this year’s documents I need to keep for a while longer. 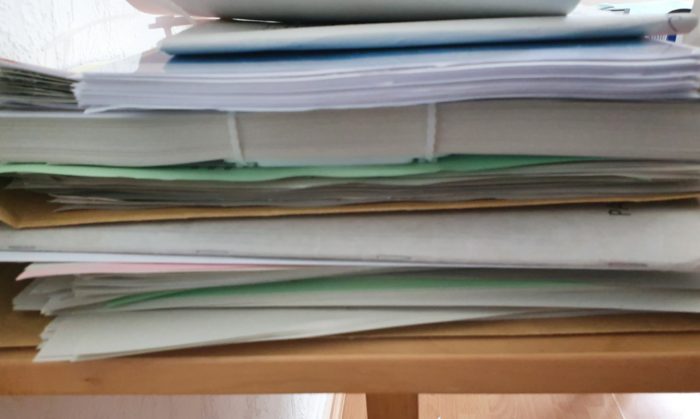 There was four times this on the kitchen table and two big stacks (like 10 times this) in my livingroom. Not anymore. Finally! Did I mention yet that I have a procrastination problem? I do. Obviously. There are still various folders, trays and stack on my shelf to sort and shuck – most even older than the stuff I got rid of today. But I’ll keep that for another weekend or vacation time, I guess.

I rewarded myself with icecream after I took the second big box of paper to the recycling. I defintely think I’ve earned it. 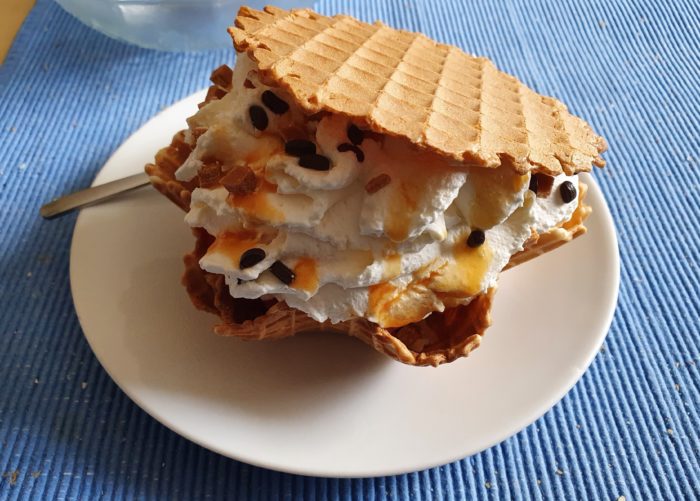 “9 o’clock shivers” | That’s what Frank Turner calls the feeling he gets, when’s at home after a tour and the usual time to go on stage comes around in the evening. For the last 14 weeks Frank played 12 live stream shows to support independent venues and two for his crew and and himself. He had his reasons to stop that for now or for ever, though I assume there will be more live streams shows in the future. There definitely will be “Show 2500” in a few weeks. Socially distanced on a stage with the Sleeping Souls, which is soooooo cool! I miss the guys and it’s going to be fun to see them all together again, even though it’s only on a screen. Anyway, it’s Thursday evening, a few minutes before the usual showtime and and I feel… weird, that for the first time in over three months, I won’t see Frank live on my TV. I won’t be chatting with gig buddies, familiar names and friends at the chat.

I’ve got time to finish this blog post though 🙂